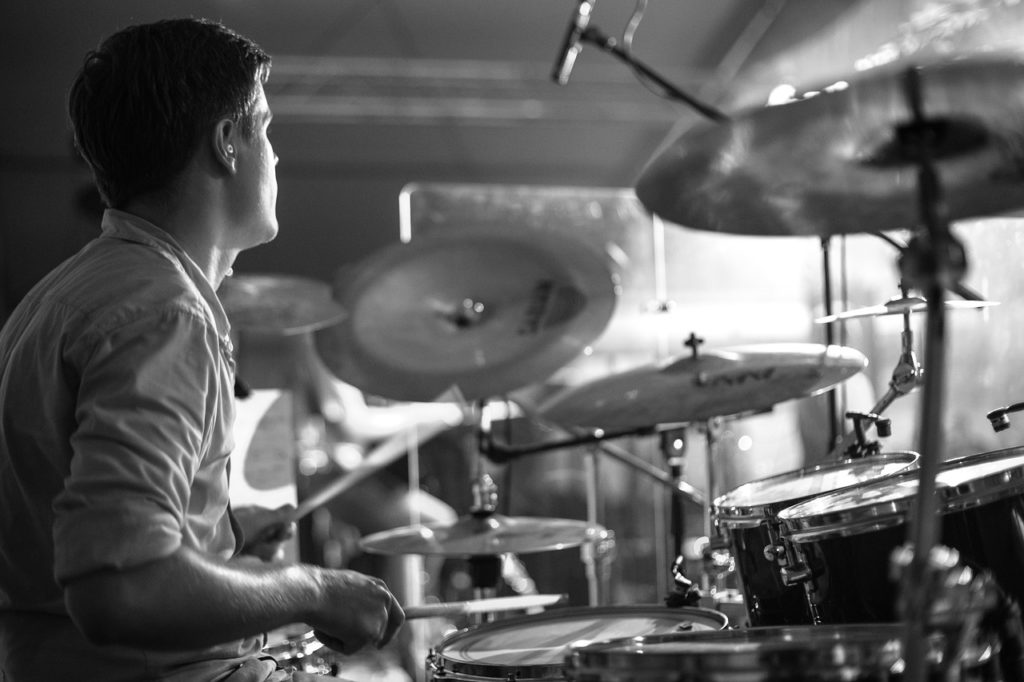 How we have made Song Rhythm Tracks more and more usable.

The initial concept of Song Rhythm Tracks was always of an app having much more usability than what was then available. That was the key motivation for the app. The then available products were all far too limiting for the challenge – “

creating rhythmic backing tracks of high audio quality, for backing songs, in less than a minute, even less than half a minute, and have the track easily searchable on my mobile”.

Workstations not fit for the purpose

We had used PC workstation products that had the quality, but they took far too long to use and didn’t provide a mobile usability experience – no easy download to a mobile device and no MP3 tags once they were there and the iOS music player could never be considered a musician’s player.

Below is our list of the usability improvement, bringing Alive Drumming to its current day, Song Rhythm Tracks app.

Table-first is a proven mobile app experience, innovated by Apple with their iOS.

We have wrung every last bit of utility out of this iOS collection, adding comprehensive search facilities and section headers, providing complete setlist functionality for the tracks and more.

Recently we have added features to help with very large setlists – next and previous setlist buttons and a setlist fold feature to selectively close entire setlists while you are browsing.

Having the backing track’s arrangement clearly visible has always been a key usability feature for us. We found other backing track vendors failed to do this, so when we used their tracks we were always guessing what arrangement they had used. Did it have an intro section? How many repeats (choruses) did it have? Was this the last chorus? It seems clear to us, that if you are vending a backing track the arrangement details always needs to be visible. So it is with Song Rhythm Tracks, in the main table and in the player and later, in the audio file itself.

We recently took this approach another step further and consolidated colouring throughout the app to be consistent, one colour for rhythms, always, and another one for arrangements, always. Such a simple change, but such a powerful one, we couldn’t believe we hadn’t thought of it before!

The evolution of ‘help’

Apps, particularly innovative ones, have always needed some help within the app to explain and guide. We added a guide button with explanations of the interface. Then in a later release, we included a ‘video’ button which opens Alive Drumming’s website with video instruction. Most recently we have added balloon type tool tips, which some will prefer.

One key to Song Rhythm Track‘s usability has always been Alive Drumming’s innovation in arranging the rhythm track. We believe we are the only developer ever to take Alive Drumming’s approach, or indeed anything like it. Instead of using the digital audio workstation (DAW) approach to arranging the sections of playing, complete with fills, pre-fills, pushes and stops and everything else that drummers do, we take the approach that ideally our user should never need to know anything about that. All they need to be able to do is describe the form of the song and the app will do everything else – arrange the sections, the repeats, the middle-choruses, any intro and outro sections and always include a count-in and characteristic ending. We look at it this way, the app should do what you would expect your drummer to do. You wouldn’t be telling them how to arrange their drumming would you?

Alive Drumming has analysed all the artists’ audio; we know where everything is. We cataloged all the artists’ recordings and categorised it all. Our interface is a page of ‘pickers’ where you select your rhythm and your arrangement. It usually takes less than a minute to complete. That’s it – your ‘arranging’ is complete.

Later we figured that a common need was to create an almost identical track with everything much the same, but with small changes, such as a new rhythm, so we added a ‘copy track’ feature. Some great arrangements now take less than 5 seconds! No other app has this sort of usability!

Press the share button when you are viewing the details of the arrangement and that arrangement gets posted for everyone to copy, using the name of the track. Simple, almost silent and tremendously effective.

There is a similar mechanism for setlists – view the details of the setlist, press the share button and your entire setlist of tracks is shared using the name you have given your setlist. Now anyone else can get a copy of it by searching for that setlist name, from the same place in the app.

From the main table, pressing a track’s share button, share’s its audio. This uses the familiar iOS interface, allowing you to use whatever you have configured on your device, such as email, messaging, the filer app, pretty much anything. What’s more, that shared audio has the MP3 tags describing the arrangement and the rhythm. So useful.

Everyone appreciates a demo

Early on we figured out that having ‘factory tracks‘ in the app would help newcomers understand how to use the app. It did and we never looked back. Later, we took this a step further and developed sampler apps. These had over twenty tracks pre-arranged and the audio included into the app. They might not be exactly the arrangement you wanted, but they showed the way! They have been a huge success. Folk love them. Our latest release of the core app, Song Rhythm Tracks, includes all the samplers apps’ track definitions in the main app, in folded setlists, so that folk can download whichever of the tracks they like. We hope this allows our users the best of both worlds.

And then we had an ah ha moment.

If simply accessing pre-arranged songs is what so many folk appreciate, why not give them exactly that! The idea of the Rhythm Tracks Collective was born, a Netflix-like service of pre-arranged rhythm tracks that you search and consume much like Netflix itself. We are working on it now and can’t wait to bring it to you.